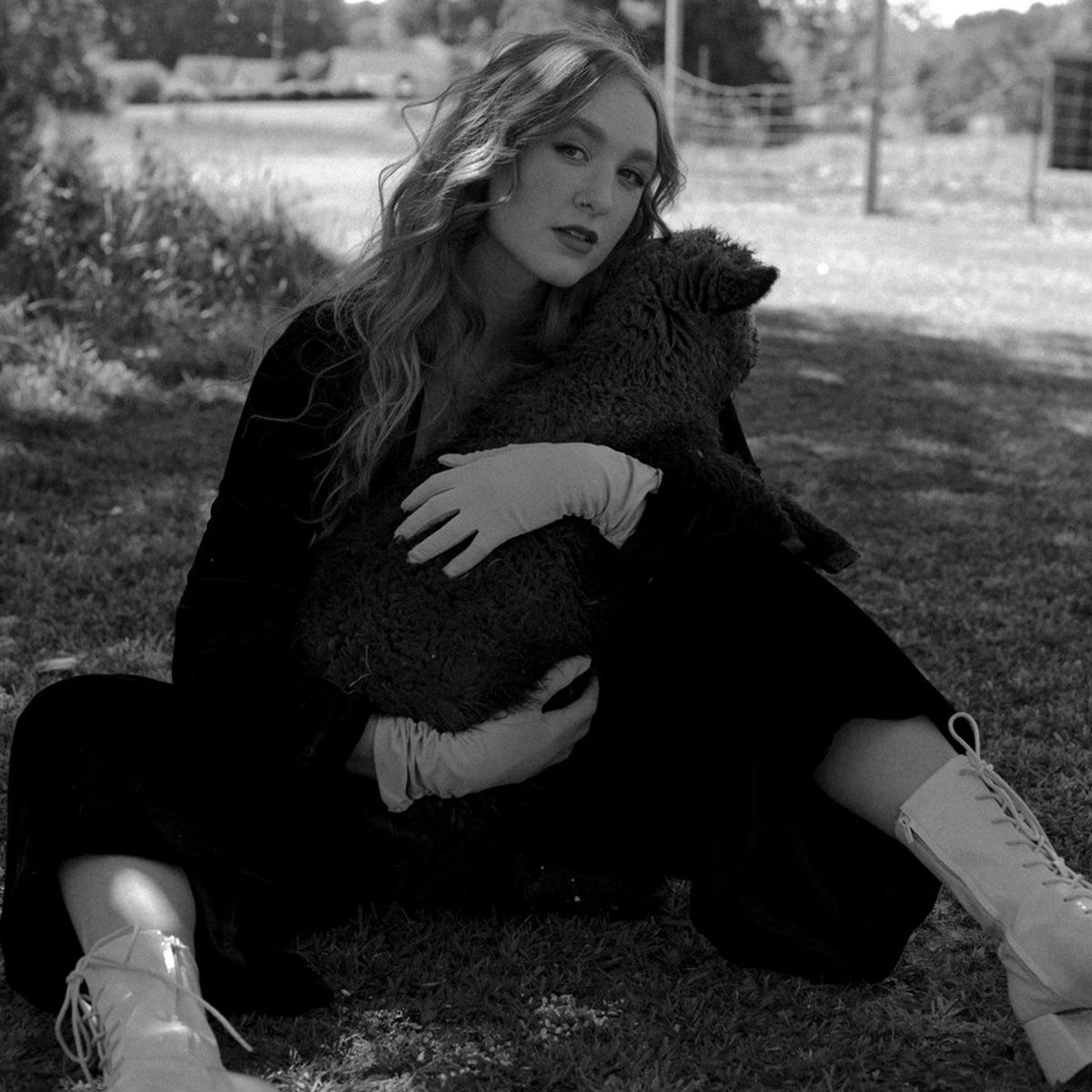 A truly original new voice in songwriting, Bella White creates an undeniable magic by mining the rare duality at the heart of her artistry. Although she hails from the Canadian city of Calgary, the 22-year-old singer/multi-instrumentalist grew up on the classic country and old-time music she first discovered thanks to her father, a Virginia native who played in bluegrass bands all throughout her childhood. On her debut album Just Like Leaving, White balances her old-soul musicality with a lyrical perspective that’s entirely of-the-moment, embracing an intense self-awareness as she documents her coming-of-age in real-time. “I’m still quite young, but I was very young when I wrote this album,” says the Victoria, BC-based artist. “All of these songs came from processing my feelings right as I was experiencing certain things for the first time in my life.”

Produced by Patrick M’Gonigle of The Lonely Heartstring Band and mixed by Grammy Award-winning engineer Dave Sinko, Just Like Leaving bears a powerful authenticity that prompted Rolling Stone to praise White’s songwriting as “sublime Appalachian heartbreak.” In sculpting the album’s sparse but lushly detailed sound, White worked with a lineup of musicians she encountered through years of making the rounds at roots-music festivals, including Reed Stutz (mandolin, vocals), Julian Pinelli (fiddle, vocals), and Robert Alan Mackie (bass). “I met everyone by jamming together, which felt perfect for this album—I really wanted it to sound like friends making music,” says White, who plays guitar on Just Like Leaving. “The whole process felt very collective and collaborative, and everyone’s creative choices ended up shining through.”

Recorded at Gilford Sound Studios in Vermont, Just Like Leaving takes its title from an exquisitely heavy-hearted song White penned soon after escaping her hometown for Boston at 18 (a cross-continent move inspired by her urge to join in the roots-music scene surrounding Berklee College of Music). Building a potent tension in its subtle storytelling, “Just Like Leaving” reveals White’s lyrical ingenuity in her stark yet poetic confession (e.g., “Now I’ve chased your love ’cause I thought it might feel woolen/Like a dram on a damn cold winter’s night”). “There was a point in my life when it felt like anytime I needed to do something to further my career, it involved leaving a situation or a place,” says White. “That song became my anthem for leaving—a way to express being scared and overwhelmed, but knowing that I needed to move on.”

For the opener to Just Like Leaving, White selected a pensive song called “Gutted,” a piece she refers to as the prequel to the title track. “That song’s about feeling like there’s always somewhere you’d rather be, and trying to come to terms with that,” she notes. One of the album’s most bluegrass-influenced moments, “Gutted” captures that sense of emotional displacement in White’s wistful vocal work and painfully candid lyrics (“At night I take to walking down lonely end roads/With the hopes someone might catch me, God knows I won’t”).

In a departure from the urgent introspection of “Gutted,” much of Just Like Leaving finds White unraveling the intricacies of a broken heart. On “Not to Blame,” for instance, she pays homage to sharp-tongued country stars like Wanda Jackson and lends her anger a certain audacious quality (“I may as well have been a winding road/You walked on me just the same/Like a little girl with wide eyes and curls, I didn’t know it was just a game”). Written in the haze of profound heartache, “The Hand of Your Raising” channels the regret and self-questioning that so often accompanies romantic catastrophe (“Now I feel red like the carpet on my bedroom floor/Full of loaded words and nothing I ain’t heard from you before”). And on “Broke (When I Realized),” White looks back on her parents’ divorce, achieving a particularly devastating beauty in the song’s sorrowful harmonies and gently rendered reminiscence of her childhood grief (“The weight of the many tears she shed nearly woke me from my bad dream/And I broke when I realized I was yet to fall asleep”). “Recording ‘Broke (When I Realized)’ was really cathartic for my inner child—it was such a relief to go in and express that sort of helplessness,” says White. “I love how it came out, and how it’s trying to be nothing but a sad country song.”

As a kid whose summers revolved around watching her dad’s band at bluegrass festivals, White initially assumed that everyone had such a deep connection to country music. “Eventually I realized that most people didn’t have that same exposure that I did,” she says. “But to me it always felt so natural, and at a young age I learned to play so that I could be a part of that world too.” First picking up the guitar at the age of eight, White developed her playing technique for several years and next ventured into writing songs of her own, drawing inspiration from artists like Joni Mitchell and John Prine. Around the same time, she began digging into the music of bluegrass pioneers like the Stanley Brothers and country legends like Loretta Lynn, in addition to honing her skills on banjo. By the time she was 16, White had begun playing at local bars and cafés, with plans of pursuing music full-time after high school. “At first I faked like I might go to college and maybe go into environmental work, but at some point I said, ‘I don’t want to do those things at all. I just want to play music,’” she recalls. After spending her first post-graduation year in Calgary, White decamped for Boston and soon set to work on Just Like Leaving. Independently released in September 2020, the album quickly led to her signing to Rounder Records, who are now re-releasing her full-length debut.

Currently writing for her second album, White has already begun to see the impact of her debut’s exacting self-reflection. “Just Like Leaving feels like a storybook of the things I went through when I was 18 and 19—each song is about a very specific feeling from my relationships during that time,” she says. “I’ve had a lot of younger people tell me that they relate to the experience of learning about yourself through someone else, and I’ve also had older folks tell me how it reminds them of when they were younger. I used to fear sometimes that I might run out of things to say in my songs, but I don’t feel that way after seeing how this album has affected people. It’s reminded me that there will always be a creative source for me to tap into.”

The world of Jack Schneider is one strewn with eccentricity and nostalgia, where a New York cowboy wanders the streets of East Nashville donning a Stetson Range, a purist philosophy, and his beloved 1956 Martin D-28 guitar, Big Jim. Jack is, as some would say, a Nashville triple threat – guitarist, songwriter, and singer, in addition to producer, guitar collector, and analog enthusiast.

Born in New York and raised in Georgia, Jack began making trips to Gruhn Guitars in Nashville when he was in high school, seeking to quench his insatiable thirst for knowledge of fretted instruments. Despite attending university in New York, he spent most school breaks and long weekends in Music City, working summers at Gruhn’s; it was there that he met and befriended Vince Gill, among other musical heroes. With one foot in New York and one in Nashville, Jack expanded his network as both a session player and an artist in both cities, gracing the stages of The Bitter End and The Bluebird Cafe with equal character and charm.

Since graduating from NYU’s Clive Davis Institute of Recorded Music in 2019, Jack has added significantly to his laundry list of accomplishments: he’s toured with Vince Gill as both guitar tech and player, produced records for multiple up-and-coming Nashville artists (recorded to tape, of course), released his first single to critical acclaim, played the Grand Ole Opry, and delivered a series of “vanishing albums:” full-length records accessible for a week at a time each during the pandemic, after which they were removed from streaming services and unavailable for physical purchase. Most recently, Jack recorded his debut non-vanishing record with the likes of David Rawlings, Vince Gill, Stewart Duncan, and Dennis Crouch. With a reverence for folk music and an instrumental prowess that captivates audiences everywhere, Jack Schneider is a sharp answer to the ever-urgent question of modern day artistic authenticity.