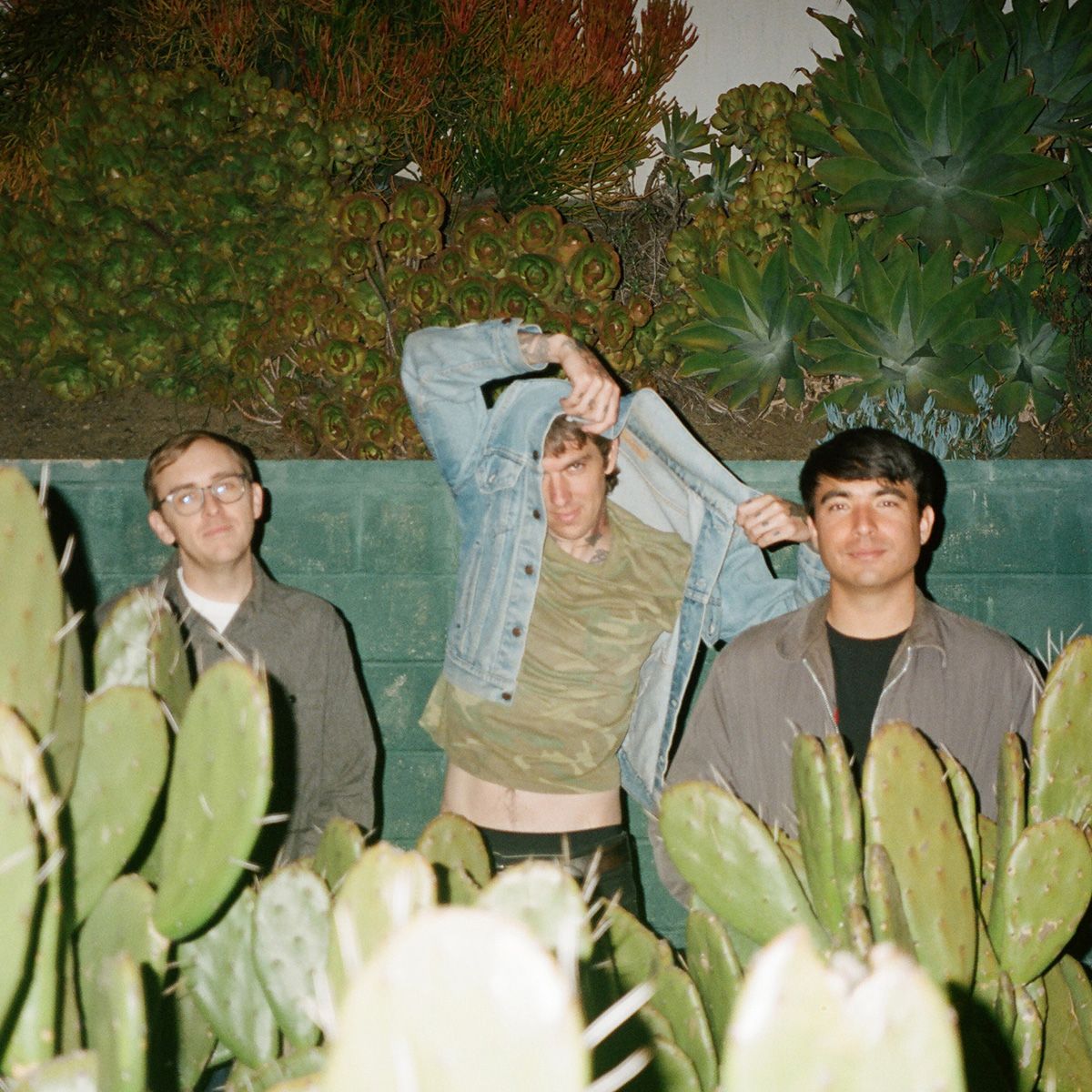 Joyce Manor is a band who have never relied on gimmicks. Since forming in Torrance, California, in 2008, the band—vocalist/guitarist Barry Johnson, bassist Matt Ebert and guitarist Chase Knobbe—have built-up a feverish fanbase by writing catchy, pop-punk songs that seem straight-forward on the surface but teeming with carefully crafted nuances upon multiple listens. This is undoubtedly true of the band’s sixth studio album 40 oz. To Fresno, an album that has songs that span the last eight years, yet comes together to form a cohesive album that marks the next chapter of Joyce Manor. “This is an interesting record because the final track ‘Secret Sisters’ was actually a B-side from [2014’s] Never Hungover Again and ‘NBTSA’ is actually a reworked version of ‘Secret Sisters’ that barely even resembles the original song,” Johnson explains. Although Joyce Manor were planning on taking a break prior to the pandemic, Johnson soon began writing to keep boredom at bay and much of the remainder of 40 oz. To Fresno came out of that period of focused songwriting.

Produced by Rob Schnapf (Elliott Smith, Tokyo Police Club) with Motion City Soundtrack’s Tony Thaxton on drums, the bulk of these songs were recorded in two separate sessions at Mant Sounds in Glassell Park, California. “The whole process was just really easy and it was also fun because as a band we hadn’t hung out very much lately,” Johnson explains. “We spent the last decade just talking, hanging out and drinking beers and then we went months without doing that for the first time in ten years.” Johnson adds that after their previous drummer Pat Ware recently left the band to go to law school, having Thaxton and Schnapf in the studio with them made for a seamless transition. “Tony was amazing to write with and he came up with amazing parts,” Johnson says, “and this was our second time working with Rob [who also produced 2016’s Cody] so there was already a lot of trust when it came to his musical vision. I think he made these songs a lot better.”

As its title suggests, 40 oz. To Fresno is an album that indulges in the unorthodox—and correspondingly, the first track is a cover of “Souvenir” by Orchestral Manoeuvres In The Dark, which originally appeared on a split 7-inch with Jawbreaker’s Blake Schwarzenbach in 2021. Even though it’s technically a cover, Joyce Manor make the song their own via swirling synths, palm-muted guitars and Johnson’s distinctive croon. This somewhat sonic outlier also perfectly sets the tone for what comes next such as “NBTSA,” which features the band’s signature blend of melodic guitar leads, rock-solid bass and driving drums. However the band aren’t afraid to experiment on the album and “Reason To Believe” features chiming chords and falsetto vocals while “Don’t Try” sees Thaxton integrating inventive drum patterns to the verses, which make the song’s already infectious chorus stand out even more.

That said, this is an album that will undoubtedly please fans of Joyce Manor who have been waiting for four years for the follow-up to 2018’s Million Dollars To Kill Me. “One song I’m particularly proud of is ‘Did You Ever Know?’” Johnson explains. “I think that song is classic Joyce Manor in the sense that it’s linear and it doesn’t have any repeating parts; it just kind of starts from one point and ends up somewhere else, but somehow it seems to make sense and flow. It’s just short, bizarre and catchy.” In that spirit, 40 oz. Freedom’s nine songs clock in at 17 minutes without a second of filler and with plenty of hooks. “I think one of the things people like about our band is that we make albums where everything is there for a reason,” Johnson adds. This is evident on the album’s first single “Gotta Let It Go” which pairs saccharine verses with an aggressive bridge that effectively puts the “punk” into pop-punk.

Lyrically, the album sees Johnson stretching out lyrically, especially on songs like the jangly “Dance With Me,” which features clever wordplay and syncopation that’s not typical for an upbeat love song. “I think that song is one of my better ones lyrically in the sense that it’s got a nice balance of pessimistic verses and then a super optimistic chorus,” Johnson explains, adding that the song’s chorus was influenced by Hepcat and the Pixies. While “Did You Ever Know?” sees Johnson capturing the nostalgia of a teenage crush, “You’re Not Famous Anymore” is a tongue-in-cheek look at the perils of youth stardom. “I don’t know how much of that song is anxiety about me becoming irrelevant. but I just think about bands who were big when we were starting and now there’s no interest around them,” he continues. “I wonder what it must be like to be so excited about where your future is going and then be confronted with the reality of it. I don’t think it’s necessarily reflecting on myself but who knows?”

One thing is for certain, with 40 oz. To Fresno, Joyce Manor have established themselves as one of today’s most catchy and consistent contemporary bands, a distinction that comes on the heels of their breakthrough 2011 debut Joyce Manor celebrating its ten-year anniversary last year. Not many bands can take influence from both Black Flag and Big Star, but Joyce Manor’s unique musical language takes these seemingly disparate influences and creates something unique that is distinctively their own. “This album makes me think of our early tours, drinking a 40 in the van on a night drive blasting Guided By Voices and smoking cigarettes the whole way to Fresno,” Johnson summarizes. That sense of liberation lies at the core of this album, making it strangely apt that its title was taken from an auto-corrected text message about Sublime. Those types of happy accidents are all over 40 oz To Fresno and are well worth the subsequent sonic hangover.