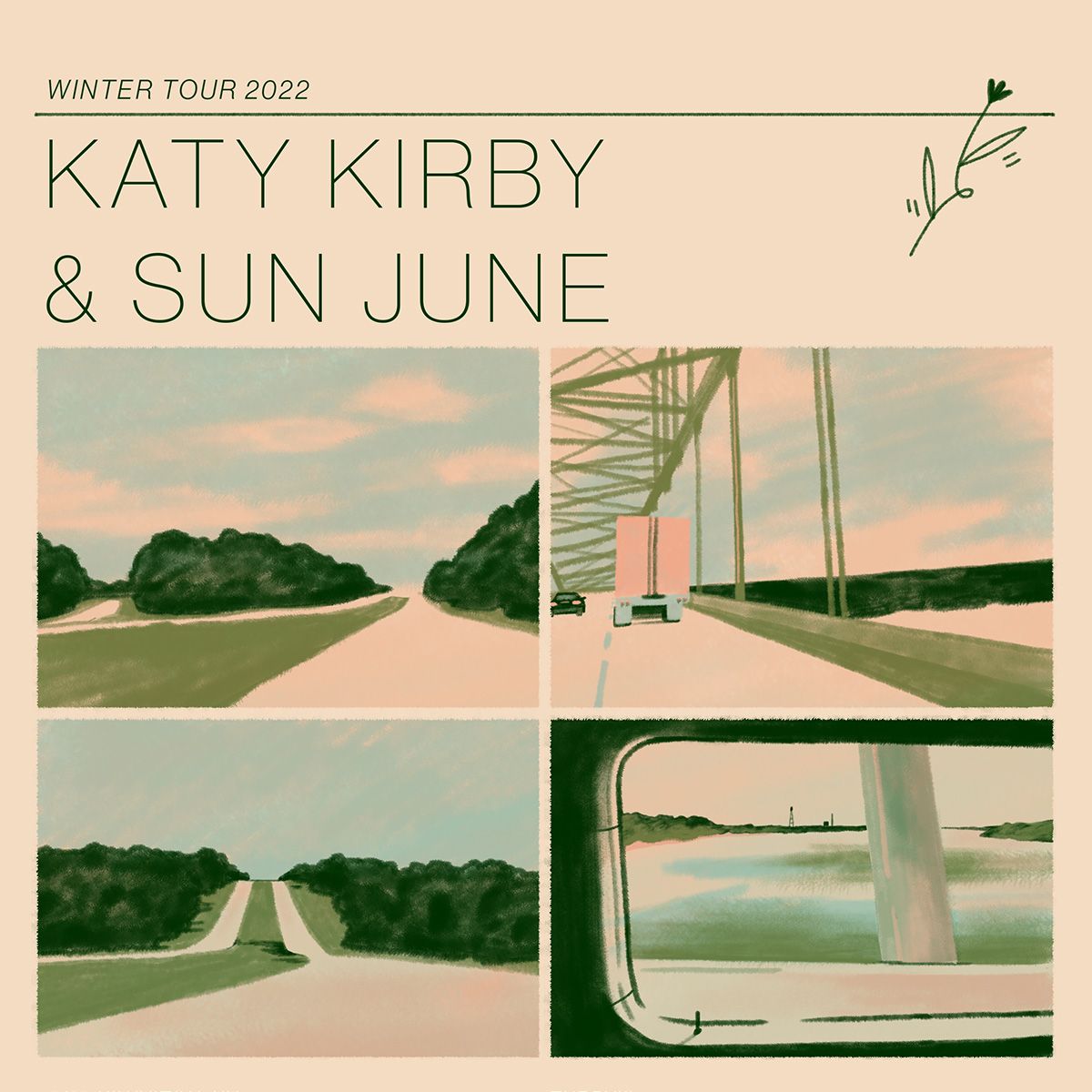 Katy Kirby is a songwriter and indie rock practitioner with an affinity for unspoken rules, misunderstanding, and boredom. She was born, raised, and homeschooled by two ex-cheerleaders in small-town Texas and started singing in church, amidst the pasteurized-pop choruses of evangelical worship, about which she shares acute perceptions.

Like many bible belt late-millennials, Katy grew up on a strict diet of this dependably uncool genre. She recalls, “In the mid-90s, the American evangelical church was making music of an extraordinarily digestible, almost unprecedentedly easy-listening kind, stylistically void and vaguely dubbed Christian Contemporary Music, or CCM. It was pop that wasn’t quite pop, determinedly hanging on to the openhearted melodies of a decade prior, straightforward so as to be easily memorable, and in a key that an average churchgoer could sing along to.”

Accordingly, Cool Dry Place finds her dismantling it. “I can hear myself negotiating with that worship-ish music, fighting that deeply internalized impulse to make things that are super pleasant or approachable.” She hasn’t fully overcome the itch to please, but to a listener’s benefit. Instead of eradicating the pop sensibilities of her past, she warps them, lacing sugary hooks with sneaky, virulent rage, twisting affectionate tones into matter-of-fact reproach, and planting seemingly serene melodies with sonic jabs. The fun is in the clash.

Take “Portals” for example, a song of country-traditional chords and gentle vocal delivery that might have easily materialized as a placid ballad. Rather, Katy drenched its soft core in metallic noise and oscillating string textures. You can imagine someone bussing glassware from a table nearby, while Katy sits you down at a booth and trusts you with notes on a pre-breakup, the first couple of minutes living in the last part of a relationship.

With the same masterful trickery, “Traffic!” juxtaposes sound and sentiment, a jittery combination of saturated pop and Rainforest Cafe’ faux-tropicalia projecting (arguably false) sympathy toward a character absorbed in his own self-inflicted misery. Though her chorus wails jubilant, Katy weaponizes its catchy gusts to criticize privilege: “Nobody has it better than you.”

Katy’s residual ties to church life are audial alone; spiritually, she has worked to detach. “Until a couple of years ago, I spent much of my time falling out of love with God. My life until then hadn’t just been participating in a church so much as completely, profoundly believing—youth group, sure, but also a few attempts to cast out demons. Learning how to think or see things outside of that very intense, clarified space was like rewiring my brain. I guess that if there’s one thing that unifies these songs, it’s that they’re figuring out what to do, or how to love, or who to rely on outside of that context.”

The nine tracks that make up Cool Dry Place are miscellaneous in subject (motherhood, late capitalism, disintegrating relationships,) but unified by the angle from which they’re told, from a person re-learning to process life with intense attention. Each song is a catalog of fragments, the number of segments in an orange or the cut of an obsessively-worn shirt, distilled into meditations on the bizarre and microscopic exchanges that make up modern life — a relationship splintering, an uncomfortable pause, an understanding finally found. These emotional dioramas are moderated by the angular storytelling that unites Gillian Welch and Phoebe Bridgers, a favor for the conventions of short fiction over confession.

Kirby readily admits that Cool Dry Place feels like a late-bloomer’s record. “These songs were written and recorded over an embarrassingly long period of time, by a few different versions of myself.” The album began in Nashville years ago. Kirby had moved there for college, changed majors five times, briefly dropped out, and finally graduated with a handful of songs, a circle of artistic allies, an amorphous collection of leftist beliefs, and an English degree. She flailed in the solo-artist archetype for a period of time before turning to friends capable of constructing a satisfying full length. Kirby, Alberto, Hunt, Logan, and Zook spent over a year carving out bits of spare time to record in bedroom studios, living rooms, and a now-demolished former residence of Keith Urban. Tracking was finally completed over Thanksgiving 2019 at Kirby’s childhood home outside of Austin.

As its title track flips the advisory on a package of Tylenol into a hymn to human need for protection and acceptance, Cool Dry Place asks a listener to embrace the precious and contradictory nature of being a person. Katy Kirby is an artist simultaneously tender and angry, vulnerable and protected, calculated and resigned.

The five members of Sun June spent their early years spread out across the United States, from the boonies of the Hudson Valley to the sprawling outskirts of LA. Having spent their college years within the gloomy, cold winters of the North East, Laura Colwell and Stephen Salisbury found themselves in the vibrant melting-pot of inspiration that is Austin, Texas. Meeting each other while working on Terrence Malick’s ‘Song to Song’, the pair were immediately taken by the city’s bustling small clubs and honky-tonk scene, and the fact that there was always an instrument within reach, always someone to play alongside.

Coming alive in this newly discovered landscape, Colwell and Salisbury formed Sun June alongside Michael Bain on lead guitar, Sarah Schultz on drums, and Justin Harris on bass and recorded their debut album live to tape, releasing it via the city’s esteemed Keeled Scales label in 2018. The band coined the term ‘regret pop’ to describe the music they made on the ‘Years’ LP. Though somewhat tongue in cheek, it made perfect sense ~ the gentle sway of their country leaning pop songs seeped in melancholy, as if each subtle turn of phrase was always grasping for something just out of reach.

Sun June returns with ‘Somewhere’, a brand new album, out February 2021. It’s a record that feels distinctly more present than its predecessor. In the time since, Colwell and Salisbury have become a couple, and it’s had a profound effect on their work; if Years was about how loss evolves, Somewhere is about how love evolves. “We explore a lot of the same themes across it,” Colwell says, “but I think there’s a lot more love here.”

Somewhere is Sun June at their most decadent, a richly diverse album which sees them exploring bright new corners with full hearts and wide eyes. Embracing a more pop-oriented sound the album consists of eleven beautiful new songs and is deliberately more collaborative and fully arranged: Laura played guitar for the first time; band members swapped instruments, and producer Danny Reisch helped flesh out layers of synth and percussion that provides a sweeping undercurrent to the whole thing.

Throughout Somewhere you can hear Sun June blossom into a living-and-breathing five-piece, the album formed from an exploratory track building process which results in a more formidable version of the band we once knew. ’Real Thing’ is most indicative of this, a fully collaborative effort which encompasses all of the nuances that come to define the album. “Are you the real thing?” Laura Colwell questions in the song’s repeated refrain. “Honey I’m the real thing,” she answers back.

They’ve called this one their ‘prom’ record; a sincere, alive-in-the-moment snapshot of the heady rush of love. “The prom idea started as a mood for us to arrange and shape the music to, which we hadn’t done before,” the band explains. “ Prom isn’t all rosy and perfect. The songs show you the crying in the bathroom,, the fear of dancing, the joy of a kiss – all the highs and all the lows.”

It’s in both those highs and lows where Somewhere comes alive. Laura Colwell’s voice is mesmerising throughout, and while the record is a document of falling in love, there’s still room for her to wilt and linger, the vibrancy of the production creating beautiful contrasts for her voice to pull us through. Opening track ‘Bad With Time’ sets this tone from the outset, both dark and mysterious, sad and sultry as it fascinatingly unrolls. “I didn’t mean what I said,” Colwell sings. “But I wanted you to think I did.”

Somewhere showcases a gentle but eminently pronounced maturation of Sun June’s sound, a second record full of quiet revelation, eleven songs that bristle with love and longing. It finds a band at the height of their collective potency, a marked stride forward from the band that created that debut record, but also one that once again is able to transport the listener into a fascinating new landscape, one that lies somewhere between the town and the city, between the head and the heart; neither here nor there, but certainly somewhere.