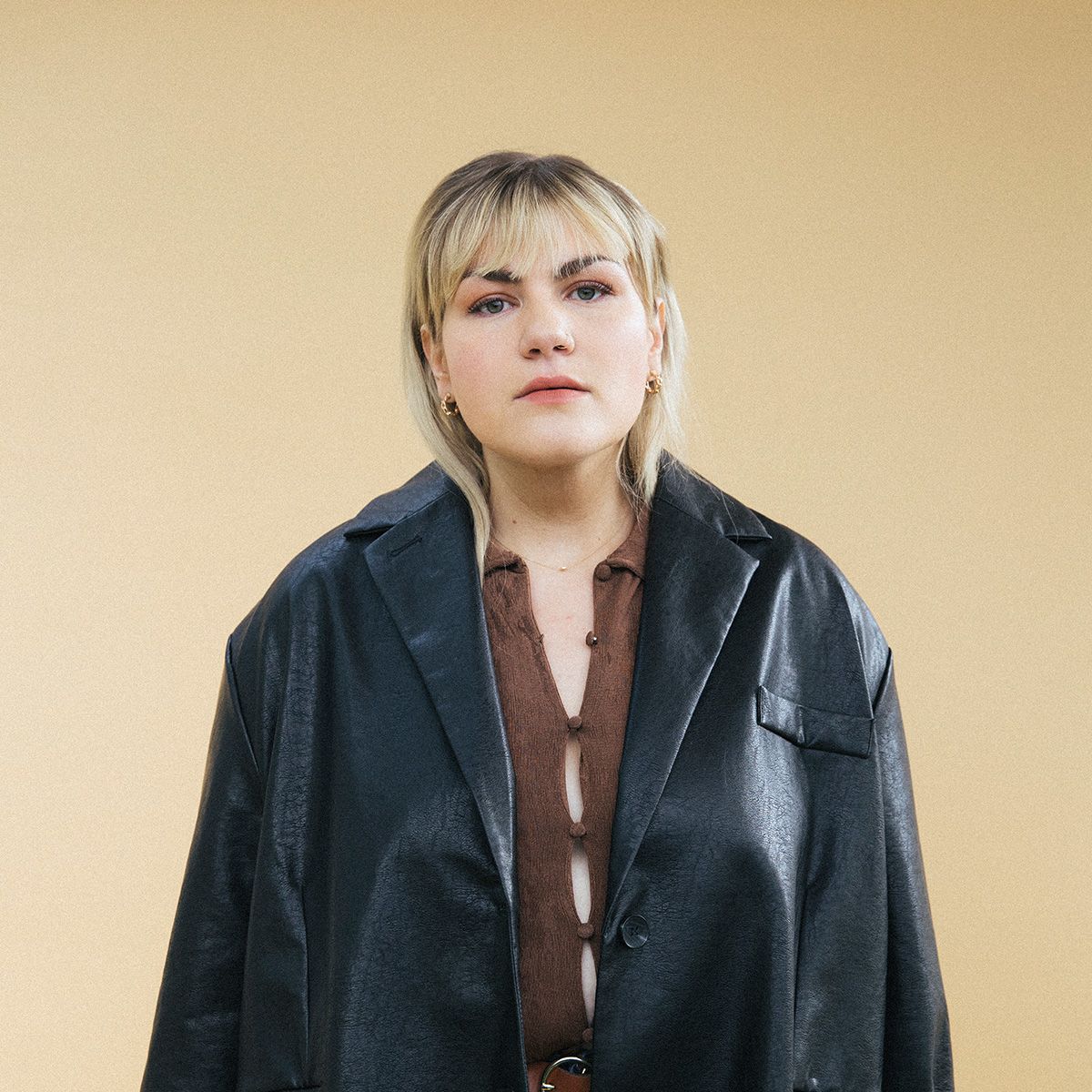 Doors at 7:00pm
Front Room
Sold out. Thanks!

For 24-year-old Maddie Zahm, there’s nothing more powerful than writing songs that scare her. On her debut EP You Might Not Like Her, the Boise-bred singer/songwriter intimately documents the massive upheaval she’s experienced over the last year: a life-changing journey that includes leaving the stifling church community where she long served as a worship leader, moving to Los Angeles and coming out as queer, and losing a substantial amount of weight. With equal parts raw vulnerability and undeniable strength — a delicate alchemy first glimpsed on her viral hit single “Fat Funny Friend” — Zahm opens up about her personal trauma, her sexuality, and her relationship with her body, embracing the kind of unapologetic yet compassionate truth-telling that’s transformative for artist and audience alike.

“This project is me believing in myself for the first time, and owning up to the things I was afraid to acknowledge for so long,” says Zahm. “I wrote these songs privately, as an outlet to process all the changes I’ve been going through, and they helped me to find a freedom that I never would’ve thought was possible. They’re songs I wish I’d heard when I was younger and hiding so much of myself from the world, so hopefully they’ll help other people to find that freedom too.”

Her first release with AWAL Recordings, You Might Not Like Her takes its title from a boldly autobiographical track that marked a major creative breakthrough for Zahm. “Before ‘You Might Not Like Her,’ I’d written a lot of heartbreak songs that were very much humor-based and focused on hypothetical relationships, which I now realize was a way to avoid dealing with what was really going on in my life,” she says. Sparked from its gut-punching opening lyric (“If you would’ve told me I’d throw away my purity ring in the middle of the airport, my younger self would laugh”), “You Might Not Like Her” quickly catalyzed the emotional transparency that now defines her music. “That whole song came out in maybe 45 minutes,” recalls Zahm, who co-wrote “You Might Not Like Her” with her friends and songwriters Carlee Chappell and Rabbit. “It was the most honest thing I’d ever written. I remember telling Carlee that I would never actually put it out, but then it ended up being the title to my whole project.”

All throughout You Might Not Like Her, Zahm matches her bravely detailed storytelling with the extraordinary vocal talents she honed through her many years as a worship leader in the non-denominational Christian church she was raised in. Also a former missionary, Zahm immersed herself in the church at a young age, partly as a means of mitigating her struggles with OCD and ADHD. “When you feel like you can’t trust your brain, sometimes it’s easier to trust other people instead,” she says. “In a lot of ways the church made sense for me, because it told me who I was and how I should behave.” Despite the unequivocally positive influence of her loving and progressive-minded family, Zahm accumulated a great deal of trauma before leaving the church at age 23. “There wasn’t much leadership in the church, and any leadership that existed was pretty corrupt — there were a lot of horrendous things going on,” she says. “I grew up in an amazing family who always accepted and supported me, but I still left the church harmed. That’s why I feel a responsibility to tell my story and speak up for everyone who hasn’t had the space to heal.”

Although Zahm dabbled in songwriting in high school, it wasn’t until the age of 20 that she fully devoted herself to developing her innate gift for songcraft. After briefly considering relocating to Nashville, she ultimately decided to move to L.A. with the goal of writing for other artists. “I didn’t really know who I was yet, and every time I wrote a song I felt like I was faking it,” says Zahm. “It just felt easier to write other people’s stories than to try to figure out my own.”

In the final months of 2021, Zahm extracted herself from the church and moved to L.A., where she began joining in co-writing sessions while crafting her own songs on the side. Informed by the immense changes she’d recently endured, those intensely personal songs include “Fat Funny Friend” — a piano-driven, profoundly moving piece that emerged from her experience in losing 120 pounds in the past year. “When you lose weight, you start to see how unkind the world is to plus-sized bodies,” says Zahm. “After losing about 70 pounds I noticed that people were treating me differently, and it confirmed my fears that a lot of my social difficulties in the past had been because of my size. I was so angry.” One night at home with her roommate (singer/songwriter Catie Turner), Zahm channeled that anger into song form, soon arriving at the insightful confession of “Fat Funny Friend.” “At first I told myself I’d never put the song out, but I ended up posting it as a way to say my piece and move on,” she notes. Within just three weeks, “Fat Funny Friend” had gained enormous traction online and amassed more than 10 million streams, inspiring Zahm to completely rethink her career path. “It was the first time that sharing a song actually meant something to me,” she says. “I realized that by letting fear hold me back from putting out songs that might impact other people, I was blatantly disregarding the beauty of being an artist. I knew that I had to share more songs, even if it terrified me.”

Co-produced by Zahm and Adam Yaron (and mostly recorded in a backyard shed at Yaron’s parents’ house in L.A.), You Might Not Like Her endlessly expands on the exacting self-reflection of “Fat Funny Friend.” “The whole theme of this EP is me talking to my younger self,” she says. “I truly believe that the 11-year-old version of me would be so disappointed in who I’ve become, but at the same time I know I’m exactly who I’m supposed to be.” Revealing the incredible depth of her musicality, Zahm brings that outpouring to a lushly arranged sound lit up in soul-stirring harmonies. “Adam and I spent hours and hours stacking my vocals to make the harmonies as grand as possible,” she says. “One of my intentions for this project was for it to feel like worship music, but with a message I believe in.”

Right from the very first lines of the EP-opening “Pocket Bible,” Zahm sets the tone for You Might Not Like Her’s heart-on-sleeve exploration of the often-painful experiences that have shaped her (“Met some guy in my science class/He was gay, I didn’t get that/Wish I had known it then ’cause looking back/He could’ve been the best friend I couldn’t have”). “When you’re raised in a church that glorifies being innocent and pure, there’s a lot of shame that comes with growing up and becoming an adult,” says Zahm. “That song is me asking all the questions that were never answered in the pocket Bibles I used to pass out at school, like ‘What happens if you kiss a girl?’ and ‘Why do I not feel better when I pray?’ I don’t think there are any answers, which is why it felt like the right introduction to a project that’s full of question marks.” Along with “Fat Funny Friend” and “You Might Not Like Her,” the EP also delivers such hard-hitting yet wholly uplifting tracks as “If It’s Not God”: a piano-laced epic built on soaring strings, bright gospel harmonies, and Zahm’s courageously candid lyrics (“They called me a sinner/When I was a saint/Hiding in her bedroom/Praying depression away”). “I came up with that song when I’d just left the church,” she says. “It felt so cathartic to write, because it was the first time I’d ever acknowledged that if what I was taught by the church was God, then maybe I don’t want to believe in him.”

With the release of You Might Not Like Her, Zahm is thrilled by the prospect of externalizing the inner dialog elegantly threaded throughout her EP. “I’d never want to be someone who just unloads all these songs and isn’t ready to have the hard conversations that might come from them,” she says. “I’m absolutely ready, and I feel like it’ll be so healing.” And by sharing her story so open-heartedly, she hopes she might help others on their own path to self-acceptance. “Looking back, I’m really glad I was plus-sized, and I’m really glad I was raised in the church — all those experiences are exactly what led me toward finding the voice I have now,” she says. “I know that as long as I’m not hurting anyone and I’m using that voice to help, then I have the freedom to be whoever I want. And I wouldn’t trade that freedom for the world.”