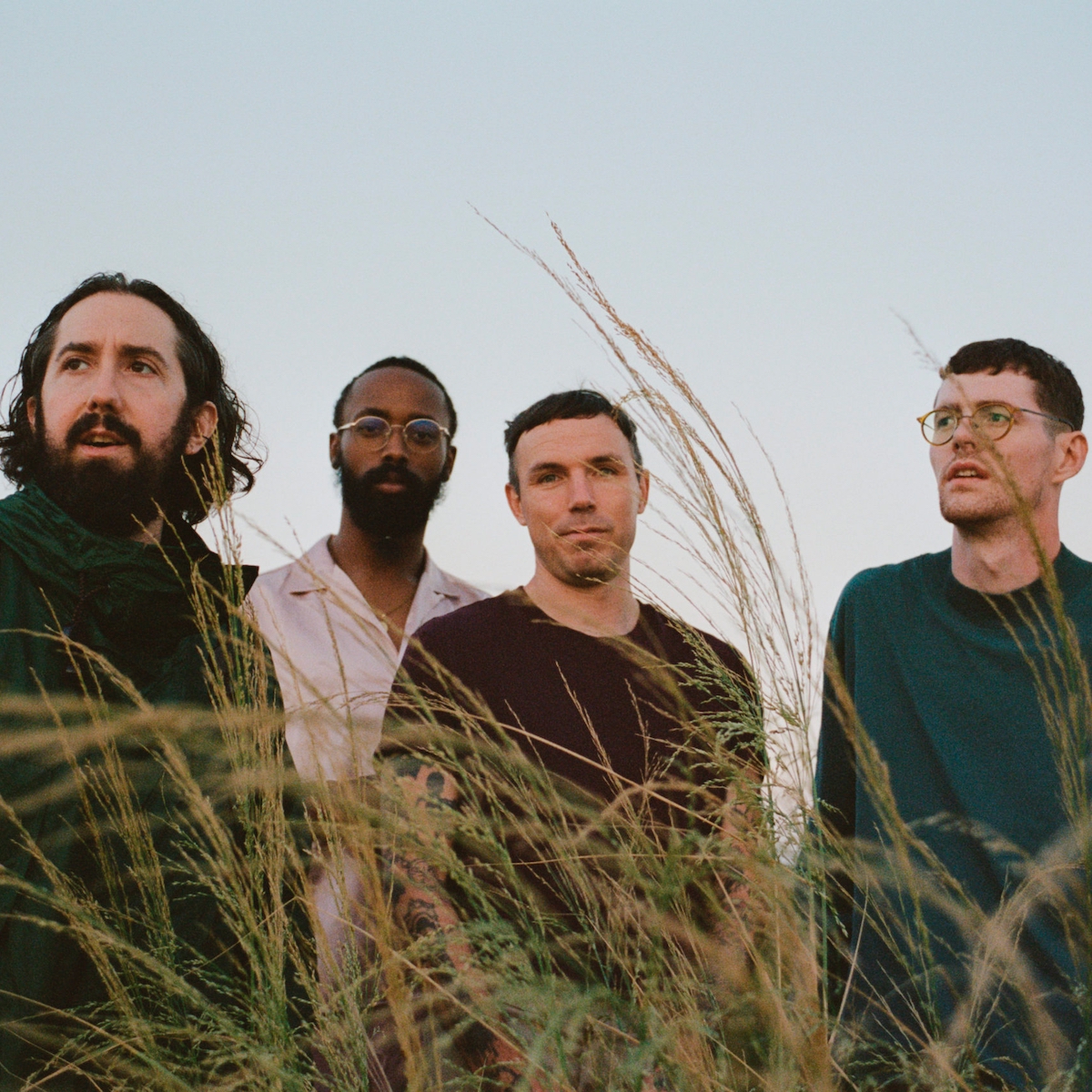 Last year, astronomers revealed the first-ever photograph of a black hole. The image resembled an eye with an ominous dark center surrounded by a lopsided ring of red. The strength of a black hole is so overpowering that nothing—not even light—can escape it.

When the black hole photograph was published on the front page of The New York Times, ​NOTHING founder Domenic Palermo bought a copy at a newsstand, framed it, and hung it above the desk where he writes. The image of a black hole might be menacing to some, but for Palermo, it fits perfectly in line with the themes he draws from. A swirling void ready to destroy anything in its path seemed like a perfect metaphor for humanity itself. One day, sitting at his desk, Palermo had an idea for a new album, and he wrote down a single line: “Existence hurts existence.”

The Great Dismal​, ​NOTHING’s​ new full-length album explores existentialist themes of isolation, extinction, and human behavior in the face of 2020’s vast wasteland. Closing in on the band’s ten-year mark, Palermo finds himself stringing together songs of misanthropic tales of Philadelphia with a refined and refreshed take on ​NOTHING’s​ classic sound. “The Great Dismal refers to a swamp, a brilliant natural trap where survival is custom fit to its inhabitants,” Palermo states. “The nature of its beautiful, but taxing environment and harsh conditions can’t ever really be shaken or forgotten too easily.”

NOTHING​, a notoriously unlucky band, was set to record in February of 2020, right around the time that America began preparing to be hit with a deadly virus. “As if this band needed any more fear and uncertainty,” Palermo says, laughing a little. After a self-imposed 14-day home quarantine, the band and producer Will Yip, who previously worked on ​NOTHING’s​ critically-acclaimed sophomore album, ​Tired of Tomorrow​, locked themselves in Pennsylvania’s Studio Four once again, completely isolated from family and friends while the madness in the outside world unfolded. The result is an atmospheric, cinematic collection of songs and stories. While Palermo and the band have made a career around their signature sound, it is clear the current lineup has reached a point of mastery. Palermo effortlessly blends layer upon layer of sweeping guitar tones that create an ensemble of vanishing and reappearing sounds, resembling ocean waves crashing against cold, desolate shores. The songs reach new levels of melodic accessibility without losing the hallmark structures we have come to expect from ​NOTHING​. Each track is vibrant, and reverberates with a crushing sense of unpredictability, undergoing a sonic metamorphosis, always being held together by ​NOTHING’s ​relentless rhythm section led by bassist Aaron Heard and percussionist Kyle Kimball. Palermo’s distinctly sincere approach to vocals are given additional support with the addition of labelmate and Cloakroom​ ​front man Doyle Martin, whose soaring harmonies float in and out of the landscapes laid out before them. The ever progressive ​NOTHING ​stay true to their chaotic outlook on life, keeping a keen eye to avoid repetition. With a radical cast of talented contributors such as harpist Mary Lattimore, classical musician Shelley Weiss, and singer/songwriter/producer Alex G., ​The Great Dismal showcases yet another side of the band’s trademark American Post-Shoegaze sound.

NOTHING’s​ cynical, yet sincere lyrical side can be heard weaving through their sound from the start of the album’s bleak-yet-glistening “A Fabricated Life” where you can hear Palermo struggle; “in skin that fits me, but never fit me” to the album’s dream like closer, “Ask The Rust” where he repeatedly questions, “when did you find out you never made it home?”. It is not all pessimism though: on “Famine Asylum,” Palermo embraces the quick ending. “Send the bombs / We’ve had enough of us.” The song, inspired by the Dr. Strangelove subtitle: How I Learned to Stop Worrying and Love the Bomb, seems to hint at a sense of humor even in the midst of all the darkness. Despite the hurdles that come with creating while quarantining, Palermo sought out NYC based visionary and Midland Agency co-founder Walter Pearce to art direct the album’s imagery. Pearce then brought on photographer/filmmaker, Jordan Hemingway to shoot both the album art and a cohesive series of music videos for ​NOTHING’s ​forthcoming singles, setting a serene yet chaotic scene of apocalyptic tranquility around the album’s sound.

Years ago, upon release from a New Jersey State Correctional Facility for a 2000 assault which Palermo still claims was in self-defense, an officer caught Palermo with a waistband full of his books. One of those books was Meditations, by Roman philosopher Marcus Aurelius. “The book had sentimental value,” Palermo said, and it is easy to see why. One of the book’s meditations reads: “The stench of decay. Rotting meat in a bag. Look at it clearly. If you can.” ​The Great Dismal​ shares this stoic attitude—even if the world is rotting, the lyrics encourage you to look directly at it. If you’re lucky, you’ll find beauty somewhere in the void.

After spending years as a major presence in Brooklyn’s thriving music scene, Frankie Rose relocated to her familial home of Los Angeles for 18 months. Frankie’s intent was to establish yet another moment in her storied indie rock métier. Gradually, she found herself short on sleep, funds and optimism. “I moved to L.A., drama ensued and I ended up on a catering truck. I was like, how can this be my life after being a touring musician and living off of music. I had really lost my way and I thought I was totally done.”

Through sleepless nights of listening to broadcaster Art Bell’s paranormal-themed archives, Frankie’s thoughts had turned to “who am I, I’m not cut out for this business, it’s not for me.” She continues, “I was literally in my room in L.A., not knowing how I was going to get out. But out of it all, I just decided to keep making music, because it is what I love and what I do – regardless of the outcome.”

Towards the end of her time spent in Los Angeles, Frankie reached out to Jorge Elbrecht (Tamaryn, Gang Gang Dance, Violens) and began sketching what became the basic outline of what felt like a new album. Then, rather fortuitously, Frankie ended up back in Brooklyn with the realization that “in the end, I’m on my own. I have to do these things on my own.”

The months that ensued meant basically working with no budget and finding ways to record in-between days. This time enabled Frankie to experiment musically with a variety of people that ultimately changed the way she worked. “I got a lot of input from people like Dave Harrington (Darkside), who was helpful reconstructing the songs, adding dynamics and changing up the rhythms.”

The result of this existential odyssey is Cage Tropical, Frankie’s 4th album. It is awash with vintage synths, painterly effects pedals, upside down atmosphere and reverberating vocals. It evokes a new wave paranormality of sorts that drifts beyond the songs themselves. “My references aren’t just music,” says Frankie, “I love old sci-fi. They Live is one of my favorite movies ever, same with Suspiria. 80’s sci-fi movies with a John Carpenter soundtrack, with silly synths – that makes it into my file, to the point that I’ll write lyrics incorporating that kind of stuff. It’s in there.”

Beginning with the shimmery, cinematic and percussive sparkling of the album’s opening track “Love in Rockets,” the song’s refrain of “a wheel, a wheel of wasting my life; a wheel, a wheel of wasting my time” immediately alludes to those darker circumstances that led to the creative origins of Cage Tropical. “It’s all essentially based on what happened to me in Los Angeles and then a return to Brooklyn,” says Frankie. “Misery turned into something good. The whole record to me is a redemption record and it is the most positive one I’ve made”

“I feel like I am finally free from worrying about an outcome. I don’t care. I already lost everything. I already had the worst-case scenario. When that happens, you do become free. In the end, it’s about me rescuing myself via having this record.”

By his early twenties, life and music had already chewed Aramis Johnson up. “I started pursuing music in 2013. All my time and energy was spent trying to be a part of the rap world. I started making beats for friends, started groups, and things would fall apart.”  When he saw King Krule on the cover of The FADER and encountered The Perks of Being a Wallflower, he discovered a love of not just the rap and R&B he’d grown up with, but loud guitars – and soon bought his own. After high school He was introduced by a mutual friend to Ladaniel Gipson, and they soon bonded over their shared love of indie rock. Ladaniel had spent most of his time in high school honing his skills and focusing on becoming a better musician. After a night of karaoke, they agreed to start a band with their friend Nathan Cornell, who had been playing in emo and DIY projects since his teens, and realized just how much work they had to do the next morning: Aramis had never sung or played guitar in a band before, and Ladaniel decided to become their drummer when they couldn’t find one. The four members make up the project, now called Enumclaw. The songs that make up their debut, Jimbo Demo are the sound of three friends channelling their love of Nirvana, ‘90s R&B, and Drake into a collection of songs addressing childhood trauma and where one fits in the world – especially when a space doesn’t feel meant for you. Aramis describes “Fast N All” as a song about who you are and how you exist in other people’s heads. “It’s about trying to make peace with the fact that not everybody’s going to like you. I went through a traumatic breakup and started to go to therapy after that, so it’s about my time in therapy – what I learned, trying to make peace with myself, and feeling valid.” Second single “Free Drop Billy” is about wanting to see what you set out to do all the way through – no matter what. “Where I grew up, a lot of people are townies, or losers. I sometimes have survivor’s guilt about it. I went to college, and I’ve done some stuff that a lot of people I know in my life haven’t. It’s about not wanting to fall back into the traps of things like that, about not wanting to end up like some of my friends. I don’t want to get stuck.” As the sessions for Jimbo Demo came to a close, the trio asked Aramis’s younger brother Eli Edwards to join as their bassist, a last ditch effort to keep him on the straight and narrow. He agreed before he had played a single note on a bass, and his energy transformed their sound and energy. Jimbo Demo is the sound of four people announcing themselves as they create the reality they want to see – and the first step on their journey to be the biggest band in the world. Enumclaw will release Jimbo Demo April 30, 2021 on Youth Riot Records.