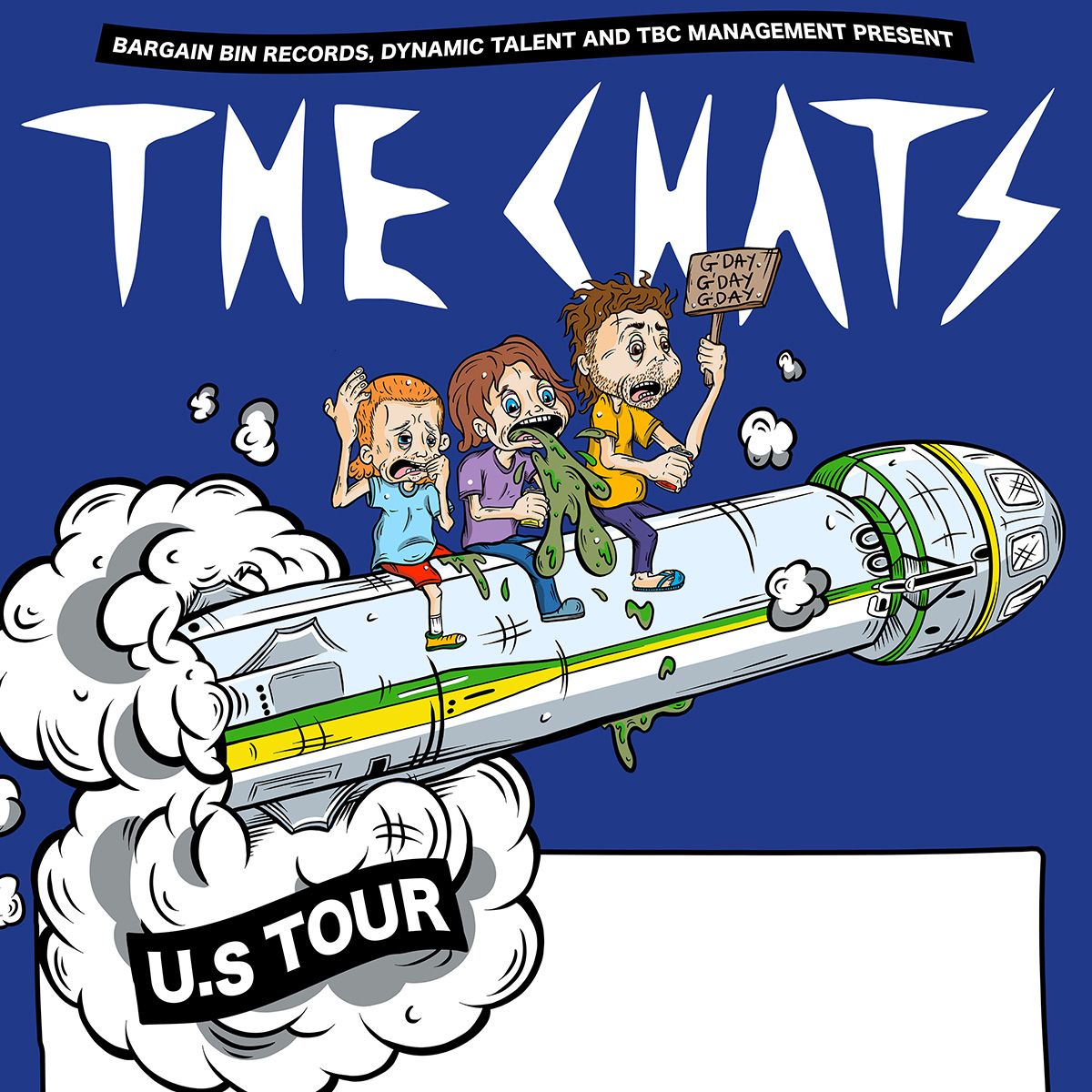 Formed in their mate’s bong shed in Coolum, Queensland 2016 at age seventeen, The Chats represent everything that’s good about Australia and nothing that’s bad: a rebel spirit, gallows humour and the endless hedonistic pursuit of A Bloody Good Time. Cold stubbies within close reach, 24-7.

Starting in their music class while at St Theresa’s Catholic College in Noosaville, a suburb of Noosa, Queensland, two hours north of Brisbane, they began practicing in the shed in nearby Verrierdale (pop: 775) during their final year of education (the school’s website notes “Whilst their music may not be everyone’s cup of tea, they have certainly made an impact, and they continue to Dare the Dream.”). Their name meanwhile comes from the nearby suburb of Chatswood.

Drawing influence from the same fertile Australian pub rock scene that spawned everyone from AC/DC and The Saints to Cosmic Psychos and The Hard Ons, and sharing a similar singular self-contained approach to their art as such latter-day Aussie rock heroes as King Gizzard & the Lizard Wizard, The Chats describe themselves as “dropkick drongos from the Sunshine Coast of Australia”. It’d be difficult to argue otherwise.

Their dress-down image of mullets, shorts, sports tops, thongs or a sandals-and-socks combo, and cheap sunnies celebrates this fact. But don’t by mislead: The Chats are sharper than you think, and they write killer songs that hold their own in any era. Their self-titled debut EP was recorded in their school’s studio in 2016 and featured seven joyous sky-punching tracks that combined 60s garage punk and 70s new wave punk (highlights included ‘Mum Stole My Darts’ and the 53 seconds bratty thrash of ‘Yeah Nah’). It was followed in 2017 by Get This In Ya, another thrilling seven song slice of economic, stripped-down, early Buzzcocks-styles punk tension, whose lyrics read like a litany of things to hate for youthful malcontents the world over (overdue social security payments, lack of bus fare, Nazis).

But where their forefathers cut their teeth on the spit-and-sawdust circuit of beer halls Down Under, The Chats bypassed years driving down dusty Outback roads when the lead single ‘Smoko’ became a 24-carat bona fide viral hit on Youtube. The Chats found themselves propelled from their Queensland shed to almost overnight renown in all the right circles.

Celebrating the great Aussie tradition of the cigarette break, an allotted smoking time protected by union law, and accompanied by a lo-fi video shot for no budget on a building site, ‘Smoko’ was a perfectly put together punk song protesting the drudgery of dole queue angst, minimum wage life and work-place hierarchies. Were they serious? wondered listeners / viewers. And, more importantly, who even cares? It didn’t matter: with its pared-down pop hooks, singer Eamon’s adolescent snarl and an unforgettable chorus, ‘Smoko’ was an instant classic of a youth anthem on a par with ‘You Really Got Me’, ‘My Generation’ or ‘Teenage Kicks’.

At the last count ‘Smoko’ has had more than 12 million views. Dave Grohl loved it so much he sent it to Josh Homme, who immediately booked the band to support Queens Of The Stone Age in Australia. Iggy Pop did the same when he played Melbourne, and keenly quizzed the band on their lyrical content. Idles were heard covering on the song on their recent Australian tour. At the time, singer Eamon was working at supermarket chain Coles. Adhering to the mantra ‘Business at the front, party at the back’ he currently maintains his mullet by trimming the front himself every couple of weeks, while his mum handles the rest of the tricky business. Drummer Matt, who was expelled from school for joyriding a golf buggy, is a professional skater.

In October 2018, The Chats brought their pub-punk (they prefer ‘shed rock’) to the UK, where all their shows sold out within a day and were immediately upgraded, including a memorable show at the Electric Ballroom, London, where they were joined onstage by Charlie Steen from Shame. Not bad considering the teenagers had never left Australia before. With two hundred gigs under their belts, The Chats began 2019 by signing a publishing deal with Universal Records and started their own label records, Bargain Bin Records.

More music followed: single ‘Do What I Want’ (“about doing whatever the fuck you want”) and the glorious follow-up ‘Pub Feed’ (a paean to “above average” pub food, including “chicken schnitty”, “parmigiana” and “rump steak – well done”) in 2019, a song that seems destined to take up residence in punk jukeboxes the world over. The Chats document the simple things in life, with songs that transcends language to tap straight into the youthful energy source. It’s a tricky artform that many attempt but at which few succeed. Still in their teens, The Chats have mastered it.

Mozart began composing at the age of four, but these boys were born singing anthems, and their debut album seems destined to be the greatest collection of music ever made, not only in Coolum, Queensland, but the entire universe. Every other musician should probably give up today.

An alliance of three punk rock goofballs who deliver fast, loud, and hooky tunes and revel in the pleasures of pizza, space travel, and getting wasted, Mean Jeans are known for their beery but relentless attack, raucous live shows, and fierce commitment to the art of partying. Their music is straightforward no-frills punk with a dash of poppy tunefulness, plenty of energy, and very little in the way of serious intent, determined to generate laughs and pogoing in equal measure.

Born from the DIY/all-ages scene in New York, THICK make music with the raw defiance of punk and addictive melodies of pop, punchy and catchy and wildly tongue-in-cheek. With their live show typically spawning a mosh pit described by Stereogum as “more like an aggressive hug,” the Brooklyn-based trio bring an unchecked intimacy to every song while building a deep and unshakable solidarity with the audience.
On their debut album 5 Years Behind, THICK confronts the countless disappointments and injustices they deal with every day: the reckless hypocrisy of people in power, social media’s erosion of genuine connection, dudes who feel inexplicably entitled to share their most loathsome opinions. But even in their most exasperated moments, THICK sustains ferocious energy and untamed joy, ultimately turning every song into a wildly cathartic anthem.