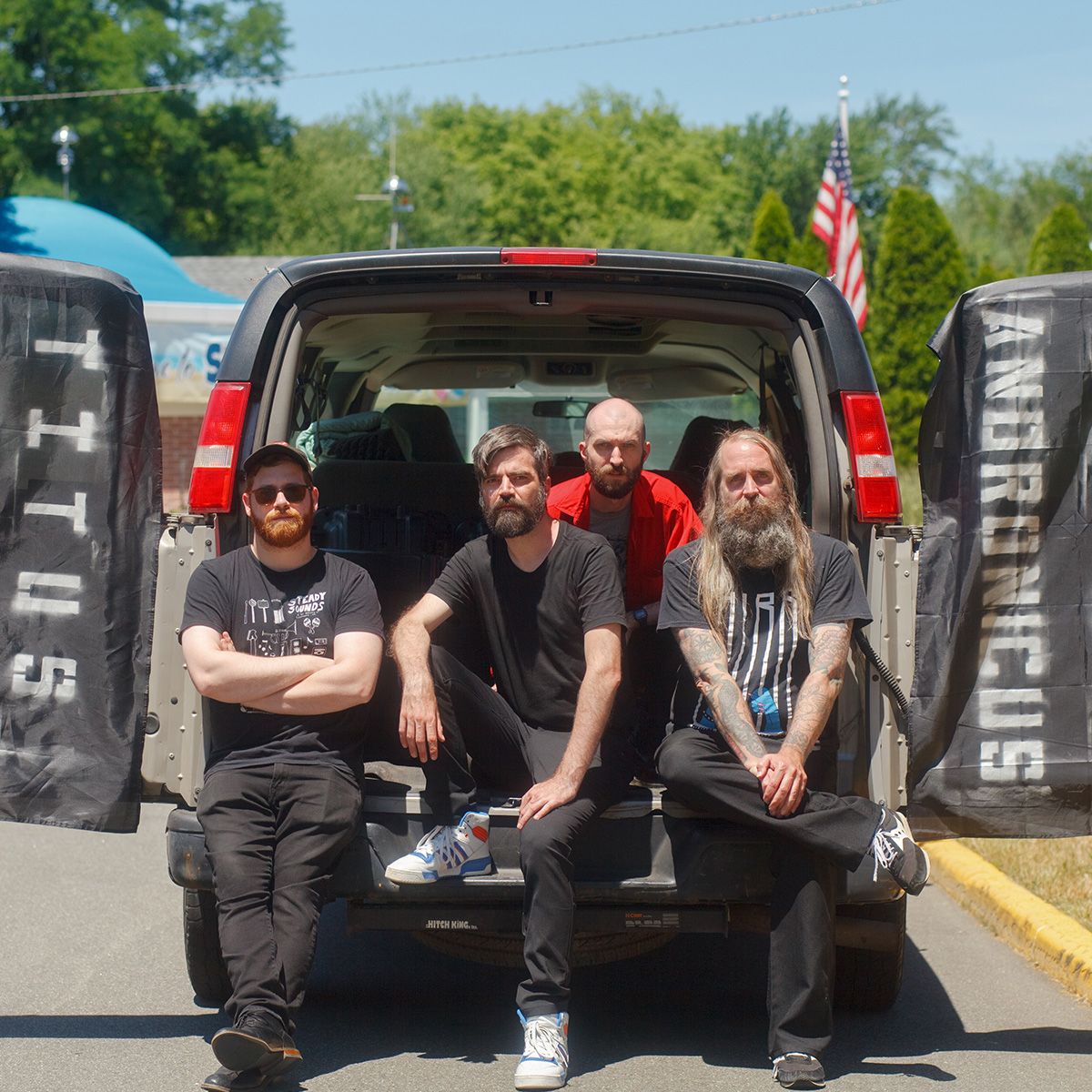 With their seventh studio album, revered rock institution Titus Andronicus invite you on a journey from fear to faith, from anger to acceptance, from grief to gratitude, chasing the mythical ideal of Ultimate Rock, all in hopes that you will find The Will to Live.

The Will to Live was produced by Titus Andronicus singer-songwriter Patrick Stickles and Canadian icon Howard Bilerman (Arcade Fire, Leonard Cohen, The Whole Nine Yards) at the latter’s Hotel 2 Tango recording studio in Montreal. Drawing on maximalist rock epics from Who’s Next to Hysteria, Bilerman and Stickles have crafted the richest, densest, and hardest-hitting sound for Titus Andronicus yet. All at once, the record matches the sprawl and scope of the band’s most celebrated work, while also honing their ambitious attack to greater effect than ever before. “It may strike some as ironic we had to go to Canada to record our equivalent to Born in the USA,” quips Stickles, “but the pursuit of Ultimate Rock knows no borders.”
|
To reach this level of focus and clarity, Stickles had to stand on the nexus of triumph and tragedy.

For his recent stretch of personal stability, he credits a newfound domestic bliss and steadfast mental health regimen (“Lamictal is a hell of a drug”) as well as the endurance of what has become the longest-running consistent lineup of Titus Andronicus—as with 2018’s A Productive Cough and 2019’s An Obelisk, The Will to Live proudly features Liam Betson on guitar, R.J. Gordon on bass, and Chris Wilson on drums.

On the crueler side of the coin, however, The Will to Live was created in large part as an attempt to process the untimely 2021 death of Matt “Money” Miller, the founding keyboardist of the band and Stickles’ closest cousin. Stickles explains: “Certain recent challenges, some unique to myself and some we have all shared, but particularly the passing of my dearest friend, have forced me to recognize not only the precious and fragile nature of life, but also the interconnectivity of all life. Loved ones we have lost are really not lost at all, as they, and we still living, are all component pieces of a far larger continuous organism, which both precedes and succeeds our illusory individual selves, united through time by (you guessed it) the will to live. Recognition of this self-evident truth demands that we extend the same empathy and compassion we would wish for ourselves outward to every living creature, even to those we would label our enemies, for we are all cells in the same body, sprung from a common womb, devoted to the common cause of survival.”

“Naturally, though, our long-suffering narrator can only arrive at this conclusion through a painful and arduous odyssey through Hell itself,” he qualifies. “This is a Titus Andronicus record, after all.”

Some of the proverbial fires lit under Stickles’ ass, however, burned more pleasurably than others. When Titus Andronicus made their long-awaited return to the stage in November of 2021, it was to celebrate the 10th 11th anniversary of their landmark breakthrough album The Monitor, and the act of playing that material before an ecstatic audience left the band determined to deliver an album that would reach for those same lofty heights, relying this time less on the reckless fire of youth and more on the experience and perspective at which a band only arrives with a thousand shows under their belt. Through this golden ratio, Titus Andronicus have arrived at the peak of their creative powers.

From its adrenalizing opening instrumental “My Mother Is Going to Kill Me” to its wistful closing benediction “69 Stones,” The Will to Live conjures a vast landscape and sends the listener on a rocket ride from peak to vertiginous peak. Rock fans will find themselves a feast, whether they crave barn-burning rock anthems such as “(I’m) Screwed” and “All Through the Night,” rapid-fire lyrical gymnastics (“Baby Crazy”), symphonic punk throwdowns (“Dead Meat”), or an adventurous excursion into the darkness that delivers thrills as it breezes boldly past the seven-minute mark, “An Anomaly.”

As if that wasn’t enough gas for the tank, The Will to Live features sterling contributions from members of the Hold Steady, Arcade Fire, and the E Street Band, as well as duets with the aforementioned Betson, former Titus Andronicus drummer Eric Harm, and Josée Caron of the Canadian rock band Partner. The album comes packaged with gorgeous triple-gatefold artwork by illustrious illustrator Nicole Rifkin, a Hieronymus Bosch–inspired triptych which mirrors the three-part structure of the narrator’s perilous voyage across the corresponding three sides of vinyl. All together, this esteemed ensemble, with Stickles and Bilerman determined and defiant at the helm, have found The Will to Live—now, the question is… will you?

Nashville rockers Country Westerns are excited to announce their self-titled debut album, to be released on May 1, 2020 via Fat Possum Records.

Even if you don’t know their names, you likely know their work. Drummer Brian Kotzur starred in Harmony Korine’s film Trash Humpers and was a member of Silver Jews. Singer, guitarist, and songwriter Joseph Plunket led Brooklyn legends The Weight, with a bass-playing side-hustle for Atlanta’s Gentleman Jesse. Plunket relocated to Nashville ten years ago and opened a bar. It was there, in a town teeming with solo artists and hired guns, that the two bonded over their shared desire to be in an actual band.

In 2016, Plunket and Kotzur spent a year in Kotzur’s garage writing riffs and tracking demos. During those hazy, late nights they began to hone their sound. Eventually, with a handful of songs and the encouragement of their friends, they began their quest for the third ‘Country Western’. After some time playing with different lineups—early recordings feature Reece Lazarus from Bully—their friend Sabrina Rush, another rock-n-roller for life, joined them on bass. Rush plays violin and is a member of the Louisville band State Champion, but had never played bass. The instrument came naturally to her and her harmonic bass lines were a perfect fit.

The first recordings with the complete lineup were made in Nashville with engineer Andrija Tokic, but the band was soon convinced to leave Nashville to record a couple of songs with Country Westerns enthusiast Matt Sweeney. With Sweeney as the band’s producer they set out for New York and did their first session at Brooklyn’s Strange Weather Studios, with Daniel Schlett. The Strange Weather recordings piqued the interest of indie record label Fat Possum. The band returned to Strange Weather to finish the record and, shortly afterward, signed a deal with Fat Possum Records.

On their debut album, Plunket delivers his words with a cool, raspy bravado and a hint of twang, summoning the spirits of the cities in which the tracks were made. The lyrics bend towards poetry and punk rock sneer in equal measure and lines such as “Maybe I ain’t smart, but I ain’t lying” set the tone for the entire album. The songs are full of insistent guitar riffs played on an electric twelve-string, the jangle either mitigating the edge or pushing it further.

Kotzur and Rush form a tight-knit rhythm section, alternately weaving around and syncing up with one another. They build the foundations of the songs with dynamic tempo, creating a full sound with Plunket—one that is bigger than you might expect for a three-piece.