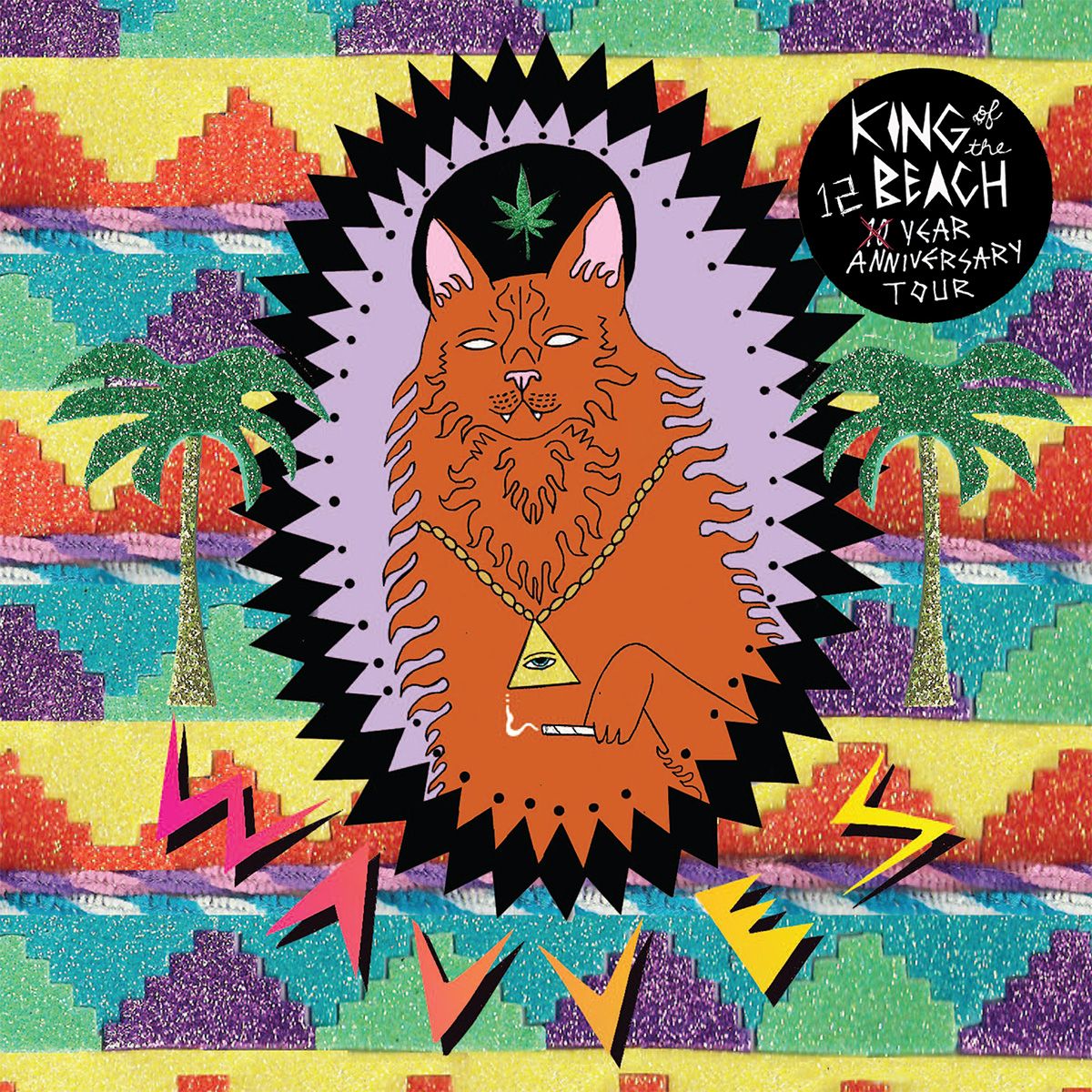 King of the Beach Tour

In the life of Nathan Williams, the year of 2009 will go down as both a highlight reel and a total shit show. Meteorically, feverishly and somewhat improbably, two albums worth of naïve punk rock he recorded behind his parents’ San Diego home as Wavves became a sensation in the world of indie music. As a result, passports got filled, capers got pulled off and lots of good things got said about the music in both print and digital ink, plus in actual human voices. At the same time, fights got fought, situations got hairy and people got indignant and mean.

What’s important now is that, in the beginning of 2010, Williams madeKing of the Beach, the new Wavves album. King of the Beach is an adventurous and ambitious record. It cuts deeper into the bleeding throat catharsis and ’60s sunshine soul that Wavves is known for. It also unexpectedly flips out with elements of primitive electronics and psychedelic studio experimentation.

Unlike Wavves’ previously released material, recorded in haphazard bursts on Williams’ laptop, King of the Beach was toiled over for three months at Sweet Tea Recording, a world-renown studio in Oxford, Mississippi. Sweet Tea is also the home of Dennis Herring, producer of the last two Modest Mouse albums, and the man who dismantled and re-assembled the sound on this record.

All the rumors are true: Herring is a studio perfectionist. Williams is not. “There were some definite ‘I want to wring you neck’-type moments,” Williams says of the sessions, but he also understood that, with the resources he had available to him, he’d be stupid not to make the album sound exactly how he wanted it. “When you’re not watering it down with a load of shit and reverb, it’s a lot harder to make a record, because you know every part is going to be heard perfectly. You can’t half-ass anything,” says Williams. “A lot more effort went into this than with previous Wavves records.”

Another marked difference in the making of King of the Beach was that Williams wrote and recorded two songs with bassist Stephen Pope and drummer Billy Hayes, the duo who became his touring band at the end of 2009. Pope and Hayes formerly backed recently departed garage rock force of nature Jay Reatard. Williams met the two after his infamously disastrous performance at the Primavera Sound Festival in Spain. “I think we all agree that they squeegeed me up, because I melted down.” says Williams.

Though there is a confidence in the scope of the album-from the title track’s denim on sand anthem-baiting to the tweaked pop of “Convertable Balloon” to the unabashed prettiness of “When Will You Come”-Williams’ usual lyrical themes of self-loathing are still impossible to ignore. “I think everybody feels that way sometimes. I know everybody feels that way sometimes. You’re a fucking liar if you don’t,” says Williams. “It wouldn’t make sense if I’m feeling a certain way to not write about it. There are songs about hating myself, but there are also songs about driving in a car with a balloon and playing Nintendo too.”

In the end, though, King of the Beach is not an album for the miserable. While the verses of “Take on the World” enumerate the things Williams hates (his writing, his music, his self) the chorus resolves into a simple, bold repeated phrase: “To take on the world would be something.”

The album title King of the Beach isn’t meant to be ironic or a self-deprecating joke. It’s a declaration. “Without sounding cheesy, we all wanted to make something inspiring,” says Williams. “It’s the type of thing where you have this much, but you could have more, so go get it.”

BOYO’s new album Where Have All My Friends Gone? and its titular phrase reflect the sentiments of loss, isolation, and confusion the Los Angeles-based and bred multi-instrumentalist and songwriter Robert Tilden experienced while a 2017 health scare turned his world upside down. Just as his career was beginning to pick up speed, following a handful of years making self-released tapes, singles, EPs, and a pair of well-received full-lengths (including his 2016 debut LP Control), Tilden began experiencing random, unexplained seizures and spent more than a year under the care of specialists who experimented with different powerful medications for an undiagnosed brain condition, leaving his career—and health—in question.

In 2018, Tilden was finally diagnosed with an acute form of frontal lobe epilepsy, was prescribed the right daily regimen of pills, and has been free of seizures ever since. Slowly, life became less of a daily crisis, but the experience left him alienated by medically-induced, uncontrollable mood shifts. The isolation had taken its toll. Finding himself alone for much of the time, Tilden seized the opportunity to make a record entirely on his own. Working mostly in his bedroom, he found comfort in the work of songwriters like Bradford Cox (Deerhunter/Atlas Sound) and Mark Linkous (Sparklehorse). Fusing those artists’ ability to turn the bleak into beauty with his own newfound focus on songwriting and production, the foundation of Where Have All My Friends Gone? was formed.

For Tilden, the making of Where Have All My Friends Gone? was a cathartic journey that not only helped his mind and body to heal from an intensely turbulent health scare but also restored his faith and trust in his artistic sensibilities. BOYO has come out from under an avalanche and grown expansively to make the album of its career. “The experience shaped my perspective but it inherently shaped the album as well,” Tilden says. “I use music to work through my problems and things I don’t understand, so this record has been a one-sided therapy session in a way. It doesn’t have to be this brooding, dark thing; it can be more connective.”

Following a period of releasing songs that seem to have been lumped into the “bedroom pop” world—at once a somewhat fair descriptor but not necessarily faithful to all BOYO encompasses—Tilden resolved to try something different. Finding inspiration in the freshness he felt during some recent “play what I want to play” sets, Tilden holed up in his home studio in West Los Angeles for two weeks in the late summer of 2019. Despite the laid back environment, he attacked the music with a renewed zest and recorded the majority of a new album in that short time. He was reinvigorated by a return to his earliest musical influences and, viewing them through the new lens of his life experience, was able to fall back in love with his own process.

As with most of BOYO’s recorded output, the fuzzed-out guitars take center stage—a quality Tilden calls “me searching for a My Bloody Valentine guitar sound that doesn’t sound like guitars.” Perhaps Tilden’s biggest strength as an instrumentalist is his self-awareness and ability to play to his strengths. “I know my limitations as a musician and I try to get around them. I almost play a character when I hop on the drums; on guitar, I close my eyes and pretend I’m Kevin Shields for three minutes and do the lead, then I pretend I’m Albert Hammond Jr. for three minutes and do the rhythm. I’m trying to be a soup of all my influences.” The album was co-produced by Tilden and engineer Chad Copelin (BRONCHO, Sufjan Stevens), who did his own mix on individual tracks after Tilden composed and recorded each one. Tilden calls the end result “a marriage of our mixes and a blend of our sonic sensibilities.”

Where Have All My Friends Gone? opens with the driving “Dogma,” a fuzzed-out guitar jam laced with big-picture imagery about protecting yourself at all costs. “Backseat Driver” displays BOYO’s fascination with a Ween-like pitch warp, and although the song’s steady drum pulse and acoustic strumming feel as if you’re hearing them through a funhouse mirror, the sounds are infectious and highlight Tilden’s ability to create a riveting earworm. “That song is basically about someone in your life telling you how to live,” he says. “It could be a metaphor for medication as well, and for people who didn’t understand what I was going through insisting on telling me how to behave.” The album’s title track came to Tilden like a mantra as he watched the classic film Raging Bull. As the music chimes while steadily ebbing and flowing like a sun threatening to break through storm clouds, the singer repeats a pair of couplets loosely borrowed from the film’s battered boxer antihero, which mimic the anger Tilden felt during his illness.

“Since making this record I’ve reconnected with a lot of people and I’ve come to realize that my friends are all right here. In the end it wasn’t my friends who were gone—it was me, to some degree. Maybe that’s a dark takeaway, but when you look around and wonder where everyone is it’s easy to point elsewhere and place blame on other things. But sometimes you’re on your own island, and I needed to make this record to get off that island.”

Uniting crunchy guitars with swirling synths, Smut embrace a liminality and experimentation that pushes the boundaries of pop music. The Chicago-based five-piece blend melody and moodiness to yield to a droney and percussive pop. As of late their influences stem from shoegaze, 90s hip hop, and trip-hop. Bell Cenower’s biting bass lines creep below the surface, while Aidan O’Connor’s drums carry the rhythm with fiery precision. Andrew Min’s & Sam Ruschman’s distorted guitar melodies lift the band to explosive heights. Hovering over her bandmates’ wall of sound, Tay Roebuck’s caustically sung meditations on grief, guilt, and growing into oneself make us nostalgic for shoegaze bands past.

Smut have conquered national tours with acts like Nothing, Swirlies, and Bully. Previously working as an actor, Roebuck’s performance is uninhibited, reflective of the stage presence of Blur’s Damon Albarn. During moments of extended instrumental sludge, Roebuck will step off to the side to take in the expansive whirlwind her bandmates have created.

On their EP Power Fantasy we find Smut in a state of transition. Opening track ‘Fan Age’ begins in a dreamscape of guitar chords as Roebuck sings of climbing the backs of giants. About a minute and a half in, Smut has their feet firmly planted as ‘Fan Age’ transforms into an infectious, self-assured anthem– “I don’t feel bad, I hold no guilt.” The EP’s title track finds Roebuck assuming the role of the underdog, hyping herself up to save the world, only to realize that no one person can save everyone. The band’s trip-hop influences show their teeth in the slow building strong closer ‘Perfect Dark’, inspired by the N64 game of the same name. Power Fantasy demonstrates a new direction for the indie outfit, one characterized by continued self-reflection and sonic renewal.